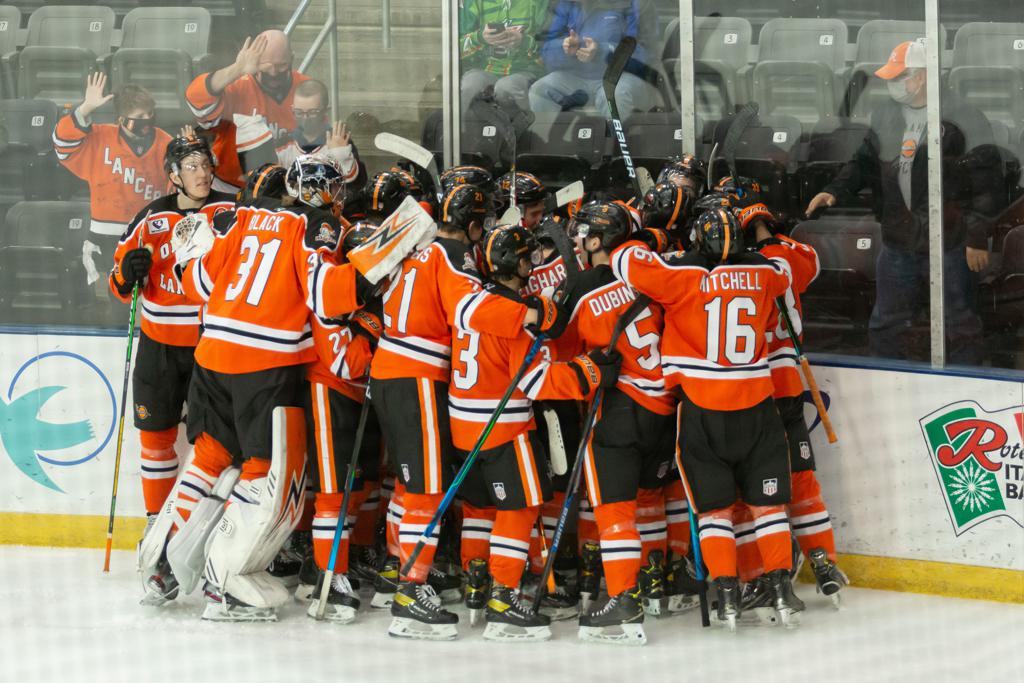 RALSTON, NE – The Omaha Lancers, in conjunction with the United States Hockey League (USHL), announced the schedule for the 2021-22 season. Again, this year’s schedule has divided the league to only Western and Eastern Conference matchups.

The Lancers will kick off the season in Pittsburgh, PA for the 2021 USHL Fall Classic. Omaha will face two Eastern Conference opponents, the Cedar Rapids RoughRiders, and Dubuque Fighting Saints.

The Lancers will face against both in-state rivals, Lincoln Stars and Tri-City Storm 10 times during the regular season. Omaha will also battle against the reigning Western Conference Champions, Fargo Force, 9 times this season.

All Lancers Friday games are set for 7:05 PM and Saturday home games are scheduled to begin at 6:05 PM and Sunday games with a start time of 4:05 PM. The Lancers are preparing the 2020-21 promotions schedule to be released in the coming weeks, which will include theme nights, giveaways, and more.

2021-22 Season Tickets are available now by clicking here or call 402-344-PUCK to lock in your seats for this season.

Omaha, NE. - What was a slow start, ended in offensive spark as the Lancers dismantled the Black Hawks in shootout fashion.

Right out of the gate, Waterloo seemed to have all the momentum. Racking up shots, hits and possession time in the first half of the period, is what inevitably led to them striking first. A beautiful play setup by Michael LaStarza and Owen Baker left LaStarza in the slot and able to just chip Baker's pass into the opposite side of the net to go up 1-0 with 12:31 to go in the first period.

Due to the control Waterloo had for the first half of the period, and Omaha picking up a few penalties in the process, they were unable to sneak a puck past Waterloo Goaltender, Jack Williams.

Ending the first period in a 1-0 Waterloo lead.

The second period was a very evenly matched period. No penalties for either team, six shots a side, and even physicality was matched. The play put on by both teams made it seem like it was definite that Waterloo would get out of the second period up 1-0. But Garrett Wright had other plans.

With just under two minutes left in the period, Ben Robertson picked up the puck in the neutral zone, hit Michael Cameron with a pass, who launched a pass to the top of Williams' goal crease where Garrett Wright was. He got the shot off, but it seemed like a routine chest save for Williams, until everyone crashed the net. Williams was backed up a bit, leading the puck to trickle through his legs and just over the goal line. And after a lengthy review, the Lancers came out of that tied up 1-1.

That late goal in the second period gave the Lancers some momentum they wanted. Coming out strong to start the third period with offensive pressure, but great saved by Williams silenced Omaha throughout the period. Including the final two minutes of the third period where the puck barely left the Black Hawks' zone.

Overtime brought excitement, like 3-on-3 hockey always should. But just like the overtime period against Des Moines two weeks back, Omaha did not have control for the first minute or two of the entire period. Kevin Pasche's goaltending was absolutely key to Omaha surviving overtime, as Waterloo won in overtime shots, 4-0.

The five minute overtime period ended still deadlocked at one goal a side. Leading the Lancers to their first shootout of the season.

Omaha opted to shoot second, giving Michael LaStarza, the lone Waterloo goal scorer the first shot. He made a nice deke move to sneak one past Pasche to go up 1-0 in the shootout.

Luck Strickland was the first shooter for Omaha, as he went in with no dekes, just simply picked the lower left corner, and capitalized. Tying the shootout 1-1.

John Waldron of the Black Hawks and Luke Strickland of the Lancers both got shut down in round two, followed by Gavin O'Connell getting stuffed in the beginning of round three. Giving Garrett Wright the final shot.

Garrett Wright, the single goal scorer for Omaha glided in at medium speed and slipped one by Williams to cap off a 2-1 win for the Lancers.

The Lancers will be back in action on Saturday, October 16th for a 6:05 P.M. puck drop with the Sioux City Musketeers at Ralston Arena. This is a makeup game for the postponed game that was supposed to take place on October 8th.

If you purchased tickets to the game on the 8th simply bring them with you as they will be accepted. And of course, the game can be caught on MixLR and HockeyTV.

OMAHA, NE. - The Sioux City Musketeers made the trip to Ralston Arena coming off an electric comeback win over the Sioux Falls Stampede the night before. And they surely brought that same energy to Omaha.

The first period was once again, a slower start for the Lancers, resulting in a quick unassisted goal by Charlie Schoen to put the Musketeers up 1-0 just a minute and a half in.

Just over the halfway point in the period, Garrett Wright pulled through again after scoring last night, and scoring the game winning shootout goal to win, by burying a feed from Jared Wright and Michael Cameron. That goal tied the game 1-1, which was the score at the end of the first period.

The second period started with the first penalty of the game as Cade Ahrenholz caught Nick Pierre high with his stick. The Power-play of the Musketeers was easily shutdown, but it still took two minutes of the game away for Omaha.

The only other thing the second period brought was a go ahead goal for Sioux City as they took the 2-1 lead thanks to a goal from Ben Doran.

The final period started hot once again with the Musketeers taking the 3-1 lead just three minutes in off a shot from Ben Steeves.

It took a little over 11 minutes for Omaha to cut the lead to one as Cam Mitchell dodged a poke-check from Sioux City goaltender, Axel Mangbo and lifted a backhand over his right leg pad, making it a 3-2 game.

The Lancers were unable to net the game tying goal even with their offensive spark, and fell 3-2.

The Lancers will be back in action on Friday, October 22nd as the Fargo Force come to Ralston Arena for a two game weekend series. Those games can be caught on MixLR and HockeyTV.